I was watching CNN this morning as terrorism suspect Najibullah Zazi pleaded guilty recently to conspiring to detonate explosives in the United States. He was apparently going to incinerate himself and as many innocent civilians riding on a busy New York subway as he could in protest for the war in Afghanistan.

It has been a few months since his arrest, but for the most part, he had faded from my memory until the CNN report today. I thought about what these suicide bombing terrorists accomplish, which is probably not what they would like to accomplish if my reactions and thoughts are typical. Instead of fear, people generally get angry or wake up and become activists or harden their hearts. Stereotyping activities increase and only harms the innocent members of that particular ethnic group which is another side effect probably not adequately considered by these suicidal maniacs either.

Here is a historical event that I thought about while listening to that CNN report.

June 3, 1963 – Buddhist monks protest  in Hue and the government responds by sending out troops. Nine Buddhists are killed. Rioting spreads from Hue to Saigon. Diems government blamed the incident on the Vietcong and never admitted responsibility. The Buddhist leadership quickly organized demonstrations that eventually led to seven monks burning themselves to death.After the riots in Hue, June 11 – Thích Qu?ng ??c burned himself to death at a busy Saigon road intersection on June 11, 1963. Thích Qu?ng ??c was protesting the persecution of Buddhists by South Vietnam’s Ngô ?ình Di?m administration. 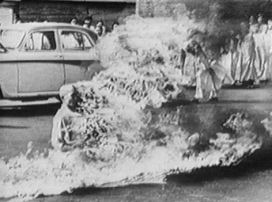 As I thought about these two distinctly different groups of people who commit suicide for various reasons, one notion came to my mind. The fact that I can appreciate and respect the Buddhist monks who made a statement sacrificing themselves without harming another human and I remember the reasons and images even today, while I don’t respect or appreciate what the Jihadist suicide bomber does has been an interesting epiphany today for me. It is also interesting to me that this event involving the Buddhist monks occurred before I was born, yet it still comes to my mind today. One event is obviously more profound than the other to me.

My advice to the suicide bomber who want to set things on fire to make a statement worth remembering their casue, call the media outlets, get the camera rolling, make a statement and detonate yourself. People will remember you and your message far into the future just as I still remember and understand the message those Monks conveyed instead of thinking you are some radical wing-nut worth erasing from the archives and my memory.

One thought on “True Resonance”